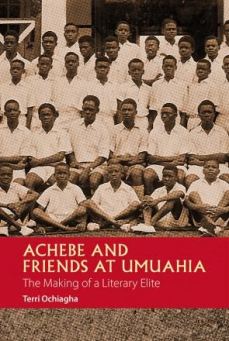 The first in-depth scholarly study of the literary awakening in the 1940s and ’50s of Nigeria’s “first-generation” writers Chinua Achebe, Elechi Amadi, Chike Momah, Christopher Okigbo and Chukwuemeka Ike in the context of their education at Government College, Umuahia, an elite colonial boarding school. The author provides fresh perspectives on Postcolonial and World literary processes, colonial education in British Africa, literary representations of colonialism, Chinua Achebe’s seminal position as a writer and the implications of this very particular education for African literature as a whole.

‘Focusing on the emergence of an African elite at Government College Umuahia and their turn to literature as a mode of self-expression, Terri Ochiagha’s Achebe and Friends answers one of the outstanding questions in African literary history: Why did the most important group of pioneer writers emerge from one institution in Eastern Nigeria in the last decades of colonial rule? Ochiagha combines the archival skills of a cultural historian with the sensibilities of a literary critic to produce perhaps one of the most important commentaries on African literature in recent years. This is a remarkable book on the origins of African literature and an unmatched model of how to do the literary history of the postcolonial world.’  –  SIMON GIKANDI, Robert Schirmer Professor of English (Princeton)

‘Offers compelling insights into the development of Nigeria’s most celebrated writers, and provides a much-needed account of how their education at Umuahia contributed to their success.’  – TIMES LITERARY SUPPLEMENT

‘A major study….this book is a new perspective on British colonial education in Nigeria and the development of Nigeria’s modern literature, especially in the way the writers’ visions were shaped to re-inscribe African literature.’ – AFRICA BOOK LINK

‘Groundbreaking on many fronts. Not only is it “the first in-depth scholarly study of the literary awakening of the young intellectuals who became known as Nigeria’s ‘first-generation’ writers in the post-colonial period”; it also, subtly, proposes a new framework for receiving and interrogating the works of said writers.’ – TORCH

Terri Ochiagha holds one of the prestigious British Academy Newton International Fellowships (2014-16) hosted by the School of English, University of Sussex. She was previously a Senior Associate Member of St Antony’s College, University of Oxford.

The Ogoni Nine were a group of nine activists from the Ogoni region of Nigeria, including outspoken author and playwright Ken Saro-Wiwa, Saturday Dobee, Nordu Eawo, Daniel Gbooko, Paul Levera, Felix Nuate, Baribor Bera, Barinem Kiobel, and John Kpuine, who were executed by hanging in 1995 by the military dictatorship of General Sani Abacha and buried in Port Harcourt Cemetery.

In what follows, Noo, writer and daughter of the late  Saro-Wiwa remembers these heroes twenty years on.

END_OF_DOCUMENT_TOKEN_TO_BE_REPLACED

Finding Africa considers itself fortunate to have had its first seminar inaugurated by Brendon Nicholls and his insightful new reading of Ken Saro-Wiwa’s Sozaboy. In bringing together a consideration of environment, psyche and objects, Nicholls was able to argue for the existence, in the text, of an embedded environmental consciousness. The significance of his reading is twofold in its relation to Ken Saro-Wiwa as an activist and figure of resistance, and in respect to Kleinian Object Relations and their applicability to postcolonial African texts.

On the 10 of November 1995 Ken Saro-Wiwa was hanged by his government along with eight other members of the Movement for the Survival of the Ogoni People (MOSOP). Sara-Wiwa’s activism had at its heart a concern for his Ogoni people, which in turn led him to lead a protest against the environmental damage to Ogoni lands carried out by the Shell oil company. In what has been considered a landmark victory against global exploitation, Saro-Wiwa’s campaign successfully managed to kick Shell out of the Ogoni region in 1993. The circumstances of Saro-Wiwa’s execution two years later have left little doubt regarding the government’s complicity with corporate exploitation and the price one pays for taking a stand against it. END_OF_DOCUMENT_TOKEN_TO_BE_REPLACED

We are pleased to announce that Brendon Nicholls will be giving our inaugural seminar on the topic of Ken Saro-Wiwa’s Sozaboy: Environment, Psyche and Objects on Wednesday, 29 October 2014.  The event will be at the Treehouse located in the Berrick Saul Building at the University of York at 17:30. This seminar opens the dialogue in the Literature and Psychoanalysis stream of Finding Africa.

Nicholls lectures in the School of English, University of Leeds. He is the author of Ngugi wa Thiong’o, Gender, and the Ethics of Postcolonial Reading (Ashgate, 2010) and Nadine Gordimer’s July’s People (Routledge, 2011). He is currently working on a monograph titled Africas of the Mind: Environmental Psychoanalysis and Black Spirit Vernaculars.

Welcome to the Finding Africa blog!

Feel free to send us your name, affiliation and email address to findingpocoafrica@gmail.com if you would like to be added to our mailing list and to receive updates from us and our partners. You're also welcome to contact us with any queries/questions via this email address.